What is Decentralized Storytelling?

By Kat CizekAugust 16, 2021December 7th, 2021No Comments
This piece offers highlights from a research framework called Decentralized Storytelling I developed as a Guild of Future Architects member. I continued this research as a Mozilla and Co-Creation Studio fellow in 2019–2020.  We are cross-publishing this piece at the Guild of Future Architect’s publication GoFAr. 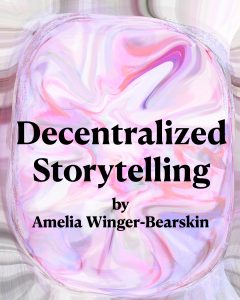 Every month, 55 million people play Minecraft. Discord boasts 130 million users. At any given time there are a million people watching Twitch streams. There are 1.8 billion gamers around the world.

These new formats are popular because they meet a deep psychological need: the basic human drive to interact with other people through stories. I call this new way of telling stories “decentralized storytelling.”

Unlike publishing, radio, film, and television, which broadcast from a single source to an audience of many, decentralized storytelling networks are peer-to-peer; they emerge from the collective space of audience participation. 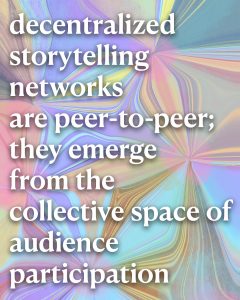 In what follows, I will try to give you a map of the story-space. You can look at this map while you are strolling through the 21st century landscape, so you will know when you have stumbled upon one.

How can you tell if you are in a decentralized story-space?

Can it be embodied in multiple media?

Does it take a long time to tell?

Games such as Minecraft, VR Chat, or Eve Online for instance, don’t have any particular ends — they are just spaces in which people can come and act out stories for as long as they like. 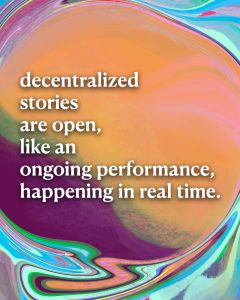 Does it involve a transparent system of transactions or trade?

Economies form in collective spaces when people define what they value as a group. Economies are an indication that a community has not only defined values but also the means of interacting with one another via exchange. (This is one reason why economists are so fascinated with game theory — Eve Online even has its own dedicated economist to help the society created in that story-space.)

Does the story make use of existing features of its world? 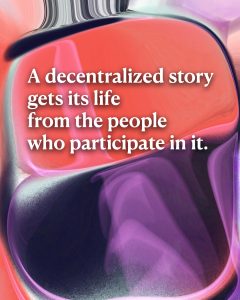 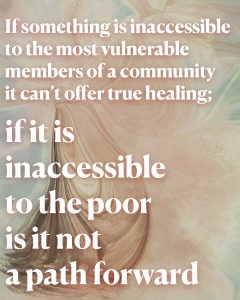 How can you tell if you are in a native or indigenous story-space? 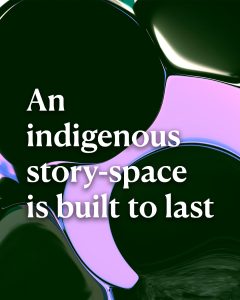 Can it be embodied in multiple media?

There are many ways of telling native stories. For the Haudenosaunee (aka Iroquois, or 6 nation: the Onondoga, Oneida, Cayuga, Seneca, Mohawk and Tuscarora) the process was shared across a variety of media. The stories were kept in multiple formats — they were incorporated into rattles, drums, baskets, pouches, metal pins, hair combs, wampum contracts, and spoken word. All this helped the storyteller and audience alike remember different aspects of the stories.

Take for example the story of why the cornhusk doll has no face. These dolls were made out of the Haudenosaunee staple corn — of which they had hundreds of colorful varieties — and were always made to be wearing beautiful outfits but never given a face.

The Story of the Corn Husk Technology

The story goes that the community was harvesting their year’s worth of crops one summer, and got distracted soaking up lots of fun in the rare northeastern sun. They didn’t harvest as much as they should have, and when a cold snap hit, the terrified community prayed to the Creator for guidance. He sent them assistance in the form of what we now call “Indian Summer” — that strange time in late fall when New Yorkers suddenly find that they can go to Central Park in a bikini and have one last picnic with their friends.

Excited and rather desperate to get in those last few weeks’ worth of food, everyone in the community went to the farm to harvest — mothers, fathers, uncles, aunts, grandparents, teens, babies on their mother’s backs. In their haste they left the children to fend for themselves in the longhouses. The children soon got into tremendous trouble, and the Creator sent a messenger in the form of the wise old Owl to fly down and make their displeasure known.

“How have you left the most important thing in the community alone and without any sort of guidance or oversight?” asked Owl. “The children, the single most important thing, have been left to themselves and they are running around being crazy little kids. Please, guys, this is not in any way how you are supposed to behave.”

The parents threw up their arms and said, “If we don’t harvest, those children will starve in the winter, as will we.” Owl considered this, and flew back to tell the Creator.

“This is the Corn Husk Woman,” said Owl. “The Creator has given her life so that she may be a teacher and babysitter to your children so that you can do the important work of harvesting the food for the winter.”

The children were very happy to have an entertaining teacher to sing them songs, tell them stories, walk with them to the forest, take to the fields to play games and to the pond near their home. They all had a great time with her, she was super cool. But one day she passed by her own reflection in the pond she saw how beautiful she was. She sat down and began to brush her beautiful hair and sing with her beautiful voice, and became so totally absorbed in her own beauty she didn’t realize that the children had gone back the the village and were up to their typical shenanigans.

Owl returned the the fields very upset. “Dude, guys, wtf. We sent you a literal Corn Husk Woman to take care of your kids and they are still being holy terrors in the village!”

The parents were pretty shocked. When Owl saw the look on their faces he flew to find the Corn Husk Woman, and found her taking selfies near the pond.

“Wow, just wow,” Owl said. He told her how she had betrayed the most important job that is given to any creature: to care for children, to teach them, guide them, and watch out for them. He was so disappointed in Corn Husk Woman, he took away her face. She felt deeply ashamed and returned to the children and took good care of them until the warm period ended and the parents returned. Then she returned to the corn whence she came.

Now, if I asked what is the lesson in this story, what might you say? Vanity tears apart the fabric of society? Children are our greatest resource? Don’t be lazy? Well, it is all of these things. But more than anything, it is a way to teach a technology.

The Haudenosaunee had a very advanced farming infrastructure and were able to store and provide food over the very long winters for thousands of people in their cities. Teaching even the very young the concept of organized harvest and the calendar event “Indian Summer” helps them to remember this story for generations to come. The moral lessons are good, too, but it was their agricultural technologies that allowed them to survive the long, bitter New York winters.

Does it take a long time to tell?

The first time I heard the Haudenosaunee creation story was at the Strawberry Fest at Ganondagan, the site of the largest Haudenosaunee city . My mother was the education director, and as a young storyteller apprentice she took her small children to listen to an elder who told the story. The story started on a hot summer Saturday at 11:00 am and the storyteller stopped in the beginning of the story at 6:00 pm, when we left for the day. It continued on the next day and until the Strawberry Festival ended.

The length of stories has everything to do with the way in which our society is organized. The Haudenosaunee traditionally lived in communal longhouses led by the matriarch of the family, where over 35 people would spend long, cold nights. Long, elaborate stories were something we could binge for a few hours a night over the season. Storytelling was an all-ages affair, and we needed to have exciting ways to reinforce our shared values and technological advances. 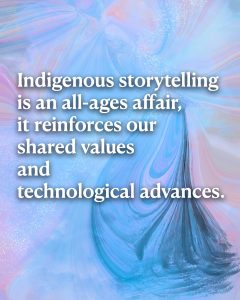 Does it involve a transparent system of transactions or trade?

One of our main economic instruments was wampum, which many people incorrectly believed to be money. It was used as a unit of exchange, but its main function was much more similar to modern-day blockchain — a complex negotiated treaty or contract in a public ledger recording agreements governed by individuals, nation states, and nations.

Wampum was a contract, but it was inseparable from the oratory structure of negotiating contracts, which was also meant to protect and communicate the shared values of the community. It was a record of an agreement that had been reached through the process of storytelling as communication. Wampum is a process of encoding abstract agreements — stories are literally woven into the material. 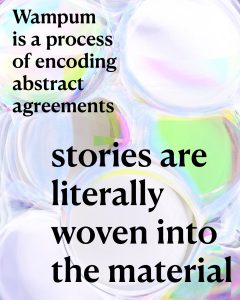 The most famous patterns are still created to tell of our clans, our confederacy, and the thing that is most important to the Haudenosaunee: the great law of peace, which made our peaceful democracy possible.

Does the story make use of existing features of its world?

Using basket patterns, wampum, songs and stories are ways for the community to remember — they are techniques of decentralizing information, embedding the same story in multiple formats.

Telling by weaving a lesson about technology, medicine, or values in with the story of how a rock formation or a river path was formed helps people remember the story and cements those relationships in people’s minds.

Can the story last for seven generations?

Today the stories we tell are embedded in networks and pixels instead of wampum and rivers, but they may still have the power to last through seven generations, to influence the lives of my great-great-great-great-great-great grandchildren, for the people I do not yet know, and those I have only met in dreams. 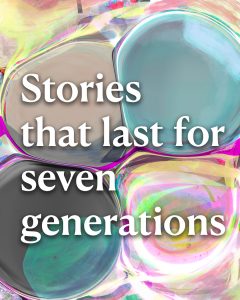