December 14 — The studio has been celebrating the release of our book with MIT Press, Collective Wisdom: Co-Creating Media for Equity and Justice. The book dropped on November 1, and since then we’ve had celebrations in New York City, Amsterdam and on-line.

On December 9, to celebrate the book in New York City, we co-hosted a special book celebration + photo share in New York City at Ford Foundation with coauthor Thomas Allen Harris and his Family Pictures Institute for Inclusive Storytelling, which is based at Yale University with hubs across the country.

New Open Documentary Lab Principal Investigator, Vivek Bald, preps for the evening in the iconic theatre of the Ford Foundation Building in mid-Manhattan, across from the UN. Thomas Allen Harris, coauthor and host of the evening in New York City, shares a photo through his methodology at Family Pictures Institute. The picture is of his mother in the center of the chemistry faculty at Bronx Community College and part of the archive on which Thomas is drawing for his upcoming PBS documentary, My Mom, The Scientist. The evening consisted of readings from the book, underscored with music dj’d by Vivek Bald, and photoshares from the coauthors and the audience.

Kat and Thomas share pictures of their parents, the scientists, reading.

Coauthor Maori Holmes shares an image from BlackStar Film Festival, which she founded.

Coauthor Louis Massiah identifies himself in an archival photo as “the tall guy in the back”, in an image of the Twigs, a group formed by African-American parents in the 1950s to create social, cultural and educational activities for their children.

Coauthor Amelia-Winger Bearskin shares an image from her project Sky World/Cloud World in which she meditates on the sacred nature of cloud-based communications.

Vivek Bald, dj for the evening and new PI of ODL/Cocr,  shares an archival image from his longitudinal documentary project In Search of Bengali Harlem.

Lab Founder William Uricchio shares a daguerreotype from a highly co-creative decade, the 1830s, which saw huge breakthroughs in photography, telegraphy, and computation.

Coauthor Richard Lachman cocreates with his kids and the tree in their front yard to produce maple syrup, before the City of Toronto shut them down with a bylaw.

Coauthor Michèle Stephenson shares an image from a recent shoot in an immersive lab at Virginia Tech. She is collaborating with her son Idris Brewster, her partner Joe Brewster and with Nikki Giovanni, the subject of her new film, Going to Mars,  which is premiering at Sundance next month.

Book contributor and artist Marisa Jahn shares a reading from the book. Marisa contributed a photo essay for the book called Mirror Masks.

We thank 300 people involved in the book, some of whom are in the audience.

A special thanks to Jasmine Heyward events and comm coordinator at MIT ODL for producing the event with such care. Also our gratitude to Don Perry, Quentin Parker of Family Pictures Institute for their expertise and joy in co-producing the event with the studio/lab, and fpr the photographs above, thanks to Lindsey Seide all courtesy of Family Pictures Institute for Inclusive Storytelling. Enormous thanks to Chi-hui Yang, Jon-Sesrie Goff, Theo Torre-de Castro, Whitney DuRall of Ford Foundation for the most generous welcome.

In November, we launched as the International Documentary Festival of Amsterdam (IDFA) Book of the Year, with many coauthors present, along with guests from Indigenous Screen Office. IDFA gifted the book to 300 invited guest filmmakers and artists of the festival.

In Amsterdam, most of the authors/ coauthors gather on stage, some of them meeting each other for the first time in person.

Some of the authors/coauthors visit local bookstore carrying the Collective Wisdom Book.

We were joined by guests from the Indigenous Screen Office Delegation, from left, Jason Ryle (producer), Tasha Hubbard (director) and Kerry Swanson (CEO of ISO) who spoke about Indigenous Protocols and working within Indigenous communities. 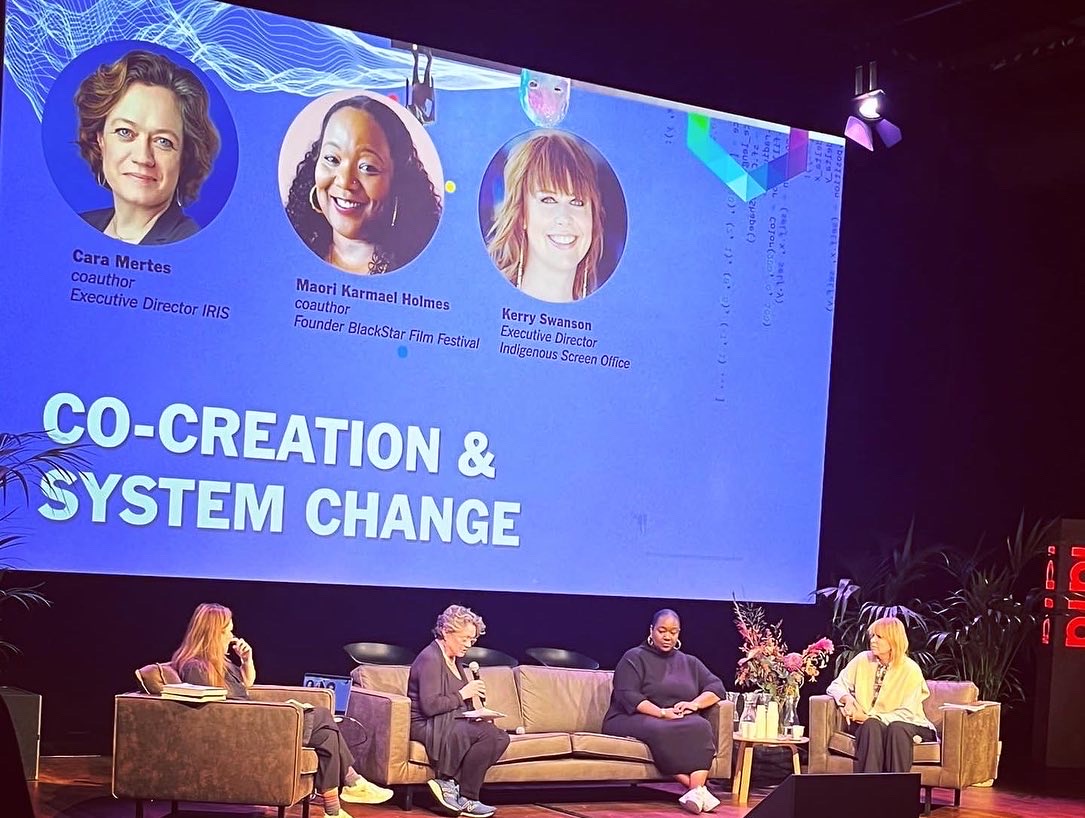 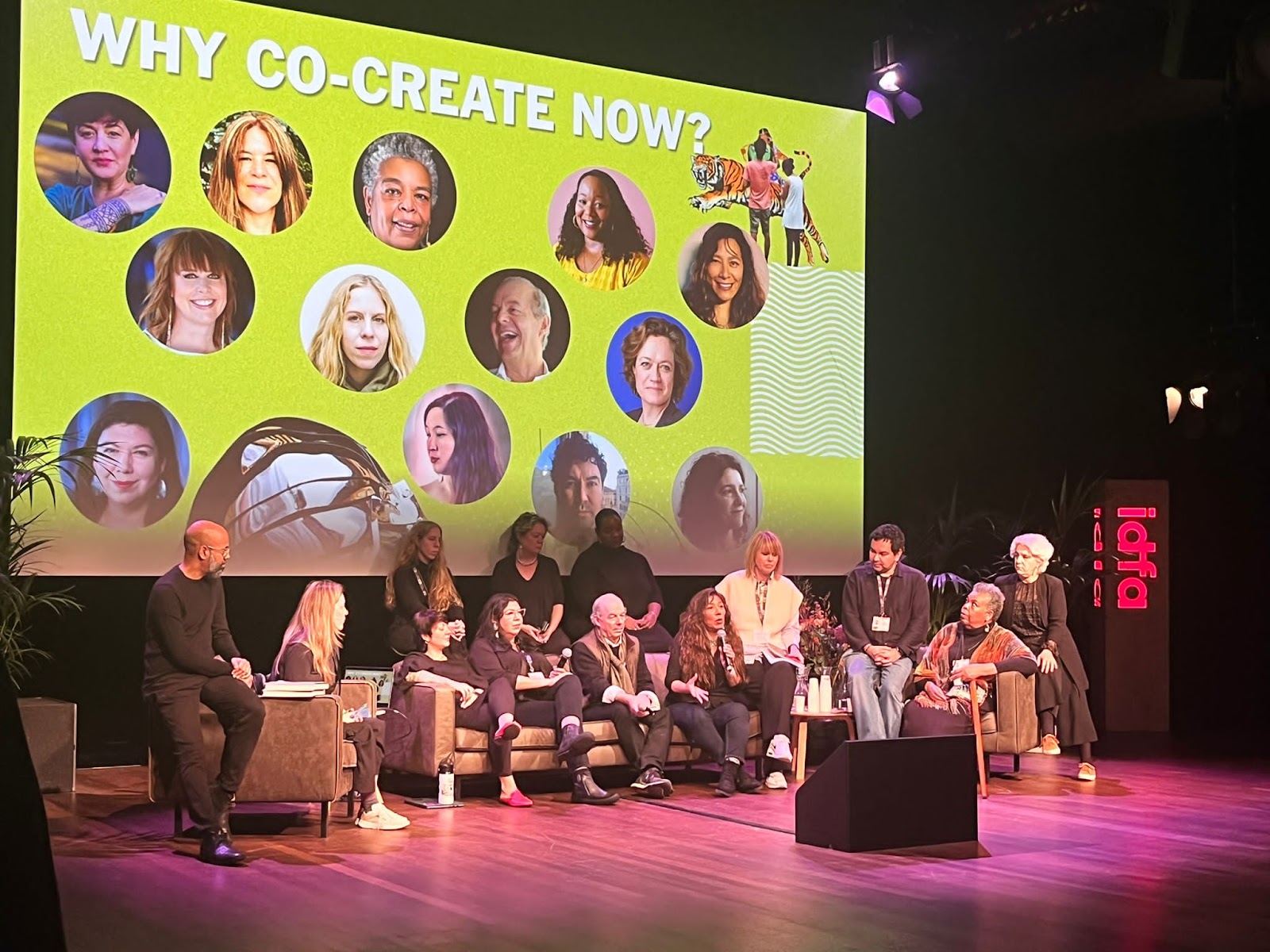 A huge thanks to MacArthur Foundation, especially Lauren Pabst and Kathy Im, for supporting author/coauthor travel to Amsterdam for the launch, as well as to IDFA, for inviting us in various capacities to make the trip for (14!) authors possible! Thanks to Laurien ten Houten, Yorinde Segal, Clemence Girard, Caspar Sonnen and Orwa Nyrabia for the incredible welcome.

If you are in the US, you can get a 20% discount for the holidays at Penguin Random House by using the code: MITPHoliday22 at checkout here until January 31, 2023.